The decomposing body of 9-year-old Boipelo Sesele was found stuffed in the wardrobe of a neighbour who helped search for her, after she went missing at Kroonstad, Gelukkwaarts in Free State, South Africa, IOL reported on Sunday, September 20.

The Grade 4 pupil was last seen while playing with her friends in the street not far from her home on September 1, at about 1.am. According to her 6-year-old friend who she was playing with at the time of her disappearance, Boipelo had been lured by a man to “look for change at the shops”.

Her disappearance prompted a huge search mission which lasted for twelve days. Police spokesman Brigadier Sam Makhele, said members of the community who had been assisting the police with the search went to investigate a bad smell coming from a shack near Boipelo’s home on Saturday, September 12, after local children had raised an alarm

He said the kids had complained of the “bad smell from a shack not far from Biopelo’s home. They went to the shack and found it locked, forced entry and opened the wardrobe where the smell was coming from and found the body of Boipelo, then alerted the police,” he said.

Neighbours attacked the owner of the shack when he arrived at the scene, according to him.  He added that police officers who had attempted to step in were also attacked.

“Ultimately, they managed to take him out of this volatile situation, but was later declared dead by the emergency medical service.” he added.

A community leader, Morena Thebe, who confirmed the incident, said the young girl’s decomposing body was found three streets away from her home.

“What is even more puzzling was that Rasta was part of the search party that worked tirelessly to find Boipelo after her disappearance. He went up and down with us as we searched for her. I remember how we went into that very yard but didn’t check in the house or shack because nothing was suspicious,” said Thebe, adding that he believes Rasta was keeping tabs on their routes by attending their daily meetings.

When they entered the shack, Thebe immediately spotted the young girl’s hand sticking out from the wardrobe.

“It was unbelievable that her body was right under our nose and that the perpetrator was among us, searching with us. I assume she wasn’t killed there but was later transported to the shack and left there to rot,”

“This incident has had a traumatic impact on the entire community and we are not the same since the discovery. Everyone is on edge, everyone is angry and people feel let down by the police force that dismissed Boipelo’s mother’s cry.” he explained.

A neighbour next to Rasta’s shack, who opted for anonymity, described him as a “character” who didn’t spend much time in that part of the community but would rather go to the “old township” and would retreat to his shack at night, high on whatever he smoked.

“Some nights he would shout and swear at people and that’s when I would come out to reprimand him to mind his language in front of the children,” he said.

The death of Boipelo has caused so much rage and anger within the community that a neighbour was unfortunately beaten by three balaclava-wearing men last Wednesday, just for being Rasta’s next-door neighbour.

The man who had a bruised face and busted lip said: “They kept asking questions about what I knew about the killing and even though I kept explaining that I knew nothing, they kept beating me senselessly.

“I had to take my wife and child far away from here to protect them because I don’t know what else will happen to me”.

Boipelo’s mother Pena Sesele and her two grandmothers Moipone and Nketsing Sesele were grieving the death of their young child.

“No mother ever dreams of burying their child and even while we searched for Boipelo, I had hope that she would come back to me. That I’ll be able to hold her and help her through the trauma of being lost for so long,” she said in an interview with Sunday Independent on Sunday, September 20.

“I never imagined that my little girl would leave home walking and come back in a casket,” said the griefstricken mother. 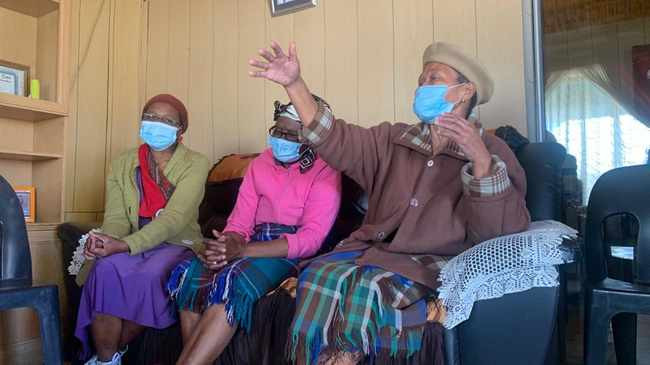 Although the family did not personally know Rasta, they said in the years that they have lived in Constantia Park, they had never imagined that a gruesome murder would come to their doorstep.

“Since the day of her disappearance, I always had visions and dreams of her returning to us, accompanied by a lot of celebration from the community. That was my prayer.” Her maternal grandmother Moipone said.

Meanwhile, Boipelo was laid to rest on Wednesday, September 16.

The views expressed in this article are the writer’s opinion, they do not reflect the views of the Publisher of NEWS 4 NAIJA. Please report any fake news , misinformation or defamatory statements to [email protected]

VIDEO OF THE WEEK : SEX FOR GRADE IN NIGERIA

Related Topics:
Up Next